A longer post with a imbalanced rythm😮 but this is a true story. 🤓An actual treasure hunt where artifacts have been discovered dating back to the 1200’s. It’s so very intriguing to me because..what were they protecting??..Hiding?? Is it still under there? Has it already been discovered and kept secret? Either way, these new found artifacts kind of change the history of America. My theory- Columbus was sent on a mission to steal back the stolen goods…he then stumbled upon land… America.

The Curse of Oak Island(in rhyme)

There is a place, a discovery was made, by three boys walking in the forest one day.
In-between a group of trees was a circular indention,
So in 1795 they grabbed shovels and started digging.
These boys names, McGinnis, Vaughan, and Smith, came across the first clue that would begin life long myth…
After diggin’………right beyond ten feet, they found long oak platforms….quite a mystery.
For these rotten old logs were buried consecutively down, and on every other platform something weird was found.
From coconut shells to coconut fibers, to charcoal and clay pickaxe impressions from pirates.
This borehole was riddled with clues from the past, the most important thing, 90 feet down, a stone slab.
In symbolic hieroglyphics, a message it carried,
“Forty feet below, 2 million pounds are buried.”

This Nova Scotia island,
Up off the Northeast coast,
It buried treasure long ago,
through a Money Pit it boasts.
This treasure locked inside, 170 feet below.
In the 10X shaft,
box drain booby traps
triggers Ocean water to flow.
Filling the tunnels swiftly with force, a drain system when trailed to its start,
leads to an artificial beach named Smith’s Cove,
one-hundred and forty-five feet long piece of art.
Folklore says that this treasure was bargained or stolen from a Royal rich Bevan.
And in searching a treasure hunter must beware for it will claim the lives of seven.

Now there are theories about the treasure.
Who buried it and what does it hold?
Where is hiding on this tiny island!
Will these secrets forever never be told?

Was it the looting of Panama?
The manuscript of Francis Bacon?
The Knights Templar?

Is it the diamonds of Marie Antoinette?
Lost scrolls of Shakespeare?
The Crown Jewels of France?

Could it have been pirates?
Maybe Captain William Kidd,
from 1612, those sly sea buccaneers..

Is it buried in the money pit, or underneath the swamp?
In cavern borehole 35?
Or right under their foot stomps?

Because each of these theories could line up to some truth and upon further testing, they’ve found remnants to provide proof.

From rubies and swords, to Templar crosses and coins.
From treasure chest lockets to bones from human loins.

From construction sites in Smith’s Cove that dates back to 1650.
To a ship graveyard filled with old nails and logs and a port to bank boats built nifty.

And bear with me now for this story is true and its curse over time has played out.
Summoned by a siren in the form Oak island known names like ole’ Roosevelt have prowled.

Starting back from 1804 the Onslow and Truro Companies were formed.
Then Oak Island Association in ’61- an accident
claiming life number one.
Then in 1897, Oak Island Treasure Company sees the second.

Skipping ahead to 1909 through the late year of 1965,
We had the crews of Roosevelt, and then Robert Restall, who created the biggest tragedy of all as 4 more hunters soon would fall.
A poisonous gas leaking fumes from the shaft, would cause Restall and his son and 2 others to pass.

Now the treasure has quickly claimed 6.
Then arrived Robert Dunfield, his tunnels flooded so he quit.

After him was stubborn Fred Nolan and then determined Dan Blankenship, who at the same time purchased land on this island and were racing for this million dollar pit.

Then year 1969 formed A Triton Alliance between  Blankenship and his friend Tobias. They discovered a port for dismantling old ships. Finding artifacts dating from beyond 1650-ish.

Skip ahead a few years a diver was sent down but from murky waters in deeps caverns well nothing was found..
But a cavity was seen shooting off to the side that divers  believe could’ve led to the sight.
This place has a name,
most treasure hunters could recall,
all this gold is locked below in the cement Chapel Vault.

Now recently the Lagina(La-geen-uh) Brothers have taken over this quest and with unanswered questions to this mystery laid Fred and Blankenship to rest.

They are drilling away and digging with diligence, finding heaps upon heaps of lost and buried evidence, but still often look over one small and quiet testament.

A man born of slaves in South Carolina by the name of Samuel Ball was hired onto Oak Island.

He was born of nothing, a poor man, allowed no decisions. But he’d eagerly return for Lot 32 with his missus.

Legends say that if he found that treasure boy he took it to the grave, for not even the closest of his family know how that land in Nova Scotia was paid.

If there’s anything they’ve learned it’s this place is unremorseful, grips unwillingness to give. But its name has been said one thousand times over, it teases with golden grins.

And if you listen closely there, you’ll hear chanting through the wind,
If you asked the trees they’d say, “It’s The Curse of Oak Island.” 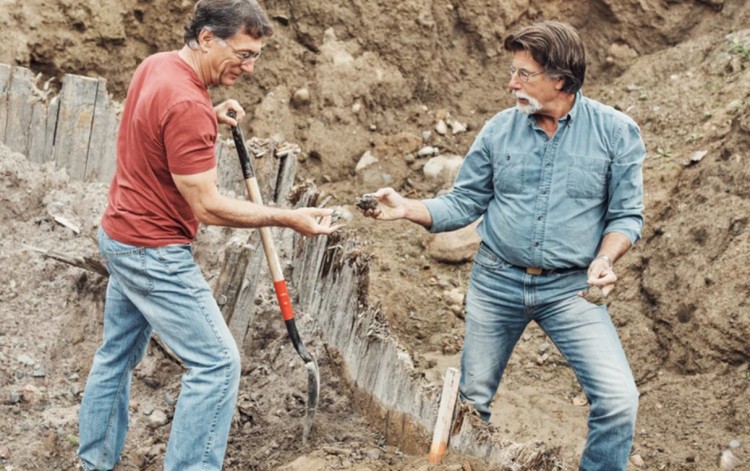 Thank you for stopping by you guys! Watch this treasure hunt unfold on the History Channel!